In their third pre-season game of the 2014 NFL season, the Tennessee Titans traveled to Atlanta, Georgia to take on the Falcons Saturday night. The two teams had practiced together earlier in the month at the Falcons practice facility. It was the last opportunity for both teams to evaluate their first team offenses and defenses. It is unlikely they will play much, if any, in the final pre-season game. 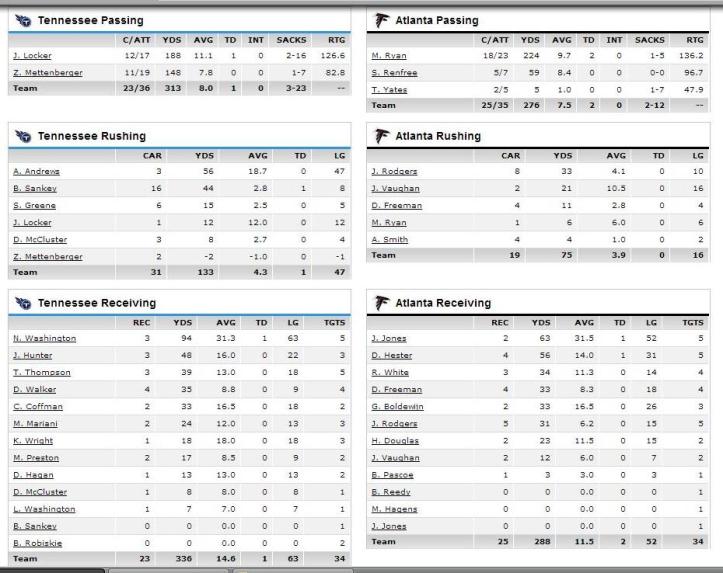 Titans quarterback Jake Locker had another good game and played into the third quarter. Although he took some hits he generally made good decisions. He finished 12 of 17 for 188 yards and a touchdown while averaging 11.1 yards per pass. He has 4 rushes for 21 yards.

Thus far in the pre-season, Locker is 21 of 30 for 268 yards, 3 touchdowns and zero interceptions. He does have one lost fumble. He has taken three sacks for 23 yards. Locker’s completion percentage through three pre-season games if 70% and his passer rating is 119.9. He is averaging 8.9 yards per completion.

Speaking of sacks, it was a dreadful night for Shonn Greene who gave up two sacks in pass protection and didn’t help his quarterback out very much. Greene carried the ball six times for 15 yards for a 2.5 yards per carry average. He was not targeted in the passing game. Note: Ken Whisenhunt states in his presser the first sack was on the offensive line. Response: Greene still has to pick up that blitz.

Zach Mettenberger again got significant playing time with Charlie Whitehurst sidelined by a pinkie finger injury. Mettenberger is still making rookie mistakes but at least he did not turn the ball over against the Falcons. He made a few bad decisions but did lead the Titans to three scoring drives against Falcons’ backups. He finished 11 of 19 for 148 yards and a 7.8  yards per completion average.

Bishop Sankey saw significant playing time with the second and third team offense. He has yet to take a snap behind the first team offensive line. He finished with 16 carries for 44 yards and one touchdown. He averaged 2.8 yards per carry and had a long run of eight yards.

Undrafted free agent Antonio Andrews continues to show why the Titans wanted him in free agency. He had three rushes for 56 yards and a whopping 18.7 yards per carry average. Andrews has eight carries for 59 yards in the pre-season and is averaging 7.4 yards per carry with a long of 47.

The offensive line looked a bit better this week despite the three sacks. Mike Roos looked like the culprit in one of the sacks and also had a false start penalty. Still, I think you are seeing signs the unit is coming together and will be one of the best in the league this year. Chance Warmack in particular looks much improved over his rookie season. Still, Jake Locker took too many hits and the Falcons had three sacks and eight quarterback hits.

Zach Brown continues to be an enigma. He led the team in tackles with eight, five of them solo. I bet he led them in missed tackles too as he had at least three whiffs in the game. Bernard Pollard was next with five tackles, four of them solo. The Titans seem intent at switching Pollard and Mike Griffin. Pollard played free safety on several of their packages last night with very mixed results.

George Wilson saw increased playing time at safety and had a very nice game. He had two passes defensed to help end drives and finished with three solo tackles. Young safety Daimion Stafford saw only limited time and finished with one assisted tackle. Stafford is still third on the team in tackles and defensive stats.

This was a sweet play by @GWilson37 and the next one too. Drive killa 😍✌️ https://t.co/8rtMoy3c4h

Despite Wilson’s play, the secondary was dreadful against the Falcons. Despite looking good in training camp, neither Coty Sensabaugh nor Blidi Wreh-Wilson are inspiring confidence. The major issues appear to be communication with some inexplicable scheme mismatches and horrible tackling. For more detailed analysis of the secondary struggles, you can visit my vine account where you can find additional video. Here are just two examples.

What we have here is a failure to communicate. Also another Zach Brown MT https://t.co/fhgfcK0FQF

The Titans got two sacks, one by Jurrell Casey and one by Sammie Lee Hill. Casey was also partially responsible for the Hill sack and he is really starting to cook in this new defense. It was Casey’s first sack in Ray Horton’s hybrid defensive system. Below is the Hill sack and how Casey was part of it.

Also, Derrick Morgan and Kam Wimbley are really coming along and look good at outside linebacker. Morgan was getting consistent pressure on Matt Ryan and was victimized by a few non calls on holding. Kam Wimbley looked really good covering Levine Toilolo here.

I been trying to tell u guys how good @mr_wimbley95 looks in coverage https://t.co/wBRXucmebj

The Titans kicking battle looks unresolved and coach Whisenhunt confirmed today the Titans will carry two kickers through first cuts. Maikon Bonani and Travis Coons are both improved and you can tell they are working hard. Coons numbers are a bit distorted because the Titans had him try a 63 yard field goal. He almost made it too.

We finally saw Dexter McCluster and Leon Washington in the return game. Khalid Wooten also inexplicably got some time there and while he didn’t light it up he is a capable return man. With numbers in the secondary you wonder if he is in the Titans plans however and he isn’t make much impression there. Brett Kern remains steady and reliable and for the most part avoided Devin Hester. The Titans once again struggled on coverage units at times.