Here we are with our weekly AFC South preview. Let’s take a look around the division at the Week 15 match-ups. We also give you our score predictions and the latest on injuries and betting lines.

The second game in the Battle for the Number One pick, New York style, will take place Sunday at L.P. Field when the New York Jets travel to Nashville, Tennessee. The Jets can run the ball and stop the run while the Titans can do neither. The Jets almost beat the Miami Dolphins with a game plan that involved second year quarterback Geno Smith only throwing 13 passes so expect a heavy dose of the run game featuring former Titan running back Chris Johnson and Chris Ivory.

The Titans offense has struggled greatly and they will be without rookie quarterback Zach Mettenberger who re-injured his shoulder in the Week 14 loss to the Giants. Jake Locker will be the starter if Mettenberger can’t go. Locker has played sparingly since Mettenberger took over the starting job in Week 8 and the results have been mixed. In his last two games in relief, he has throw three interceptions to one touchdown. He has also taken five sacks. He also lost a fumble.

Vegas has the betting line currently at even. The weather is expected to be partly cloudy with a high of 55 degrees. The Titans have won the last two games at LP Field including last year’s game where the Titans harassed Geno Smith sacking him five times. That game also featured a questionable hit on Titans quarterback Locker which caused him to miss several games with a hip and knee injury.

The Jacksonville Jaguars were already thin and that was before they lost running Denard Robinson for the year. The past few years have been tough in Jacksonville and this game won’t be easy either. The Jaguars are simply outmatched in this game.

On the other hand, the Ravens are relatively healthy and still very much in the hunt for the playoffs. The Ravens front line is top notch and the Jaguars have struggled protecting Blake Bortles. This game has all the makings of another blowout for the outmanned Jaguars. Hopefully Bortles doesn’t get hurt.

Vegas has the line at Ravens -14. Jacksonville has covered just once in its last six games while the Ravens are 4-0 ATS in their last four games against a team with a losing record per The Linesmakers. The weather should be clear and cold with a high around 40 degrees. 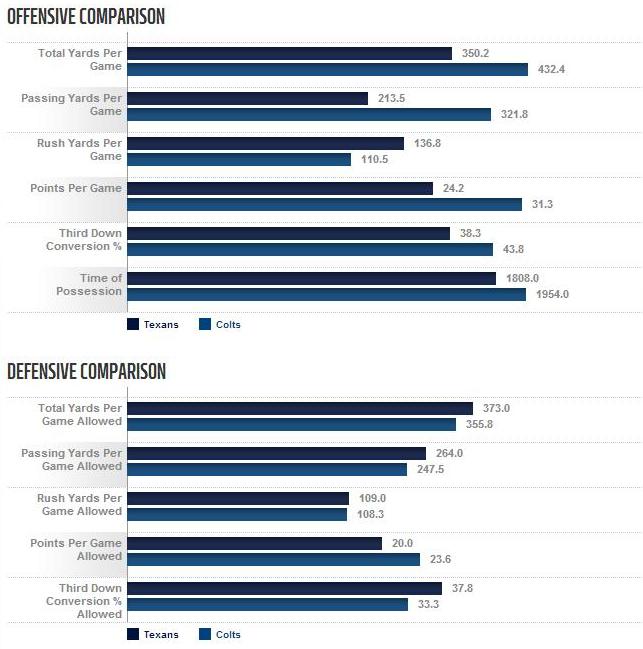 Easily the premier matchup in the division Houston is just two games back and while it might be unlikely they catch the Colts they could still make the playoffs as a wildcard. Statistically, it’s a small chance but its a chance nevertheless.

The Texans have the league’s 28th passing defense which doesn’t bode well for their chances against the number one ranked passing offense in the league. Andrew Luck has taken 24 sacks this season but he is extremely wily in and out of the pocket. To shake him off his rhythm the Texans will need to contain him and get him down fast.

The Texans are 0-12 versus the Colts in Indianapolis. Ryan Fitzpatrick has been protective of the ball since regaining the starting role and the Texans will need him to continue that trend. Vegas has the current line at Indy -7. Texans wide receiver Andre Johnson is questionable with a concussion. He will be a game time decision as will the Colts Reggie Wayne who is playing through a torn triceps.